Do you also sometimes get maps which contain zero (0) rather than NULL (no data) in some parts of the map? This can be easily solved with “floodfilling”, even in a GIS.

My original map looks like this (here, Trentino elevation model): Now what? In a paint software we would simply use bucket fill but what about GIS data? Well, we can do something similar using “clumping”. It requires a bit of computational time but works perfectly, even for large DEMs, e.g., all Italy at 20m resolution. Using the open source software GRASS GIS 7, we can compute all “clumps” (that are many for a floating point DEM!):

The resulting clump map produced by r.clump is nicely colorized: As we can see, the area of interest (province) is now surrounded by three clumps. With a simple map algebra statement (r.mapcalc or GUI calculator) we can create a MASK by assigning these outer boundary clumps to NULL and the other “good” clumps to 1: We now activate this MASK and generate a copy of the original map into a new map name by using map algebra again (this just keeps the data matched by the MASK). Eventually we remove the MASK and verify the result:

And the final DEM is now properly cleaned up in terms of NULL values (no data): Recently, in order to nicely plan ahead for a birthday lunch at the agriturismo Malga Brigolina (a farm-restaurant near Sopramonte di Trento, Italy, at 1,000m a.s.l. in the Southern Alps), friends of mine asked me the day before:

“Will the place be sunny at lunch time for making a nice walk?“

[well, the weather was close to clear sky conditions but mountains are high here and cast long shadows in winter time].

A rather easy task I thought, so I got my tools ready since that was an occasion to verify the predictions with some photos! Thanks to the new EU-DEM at 25m I was able to perform the computations right away in a metric system rather than dealing with degree in LatLong.

Direct sunlight can be assessed from the beam radiation map of GRASS GIS’ r.sun when running it for a specific day and time. But even easier, there is a new Addon for GRASS GIS 7 which calculates right away time series of insolation maps given start/stop timestamps and a time step: r.sun.hourly. This shrinks the overall effort to almost nothing.

The first step is to calculate where direct sunlight reaches the ground. Here the input elevation map is the European “eu_dem_25”, while the output is the beam radiation for a certain day (15 Dec 2013 is DOY 349).

Important hint: the computational region must be large enough to east/south/west to capure the cast shadow effects of all relevant surrounding mountains.

I let calculations start at 8am and finish at 5pm which an hourly time step. The authors have kindly parallelized r.sun.hourly, so I let it run on four processors simultaneously to speed up:

The ten resulting maps contain the beam radiation for each pixel considering the cast shadow effects of the pixel-surrounding mountains. However, the question was not to calculate irradiance raster maps in Wh/m^2 but simply “sun-yes” or “sun-no”. So a subsequent filtering had to be applied. Each beam radiation map was filtered: if pixel value equal to 0 then “sun-no”, otherwise “sun-yes” (what my friends wanted to achieve; effectively a conversion into a binary map).
Best done in a simple shell script loop:

[Edit 30 Dec 2013: thanks to Anna you can simplify below loop to the r.colors call thanks to the new -b flag for binary output in r.sun.hourly!]

As a result we got ten binary maps, ideal for using them as overlay with shaded DEMs or OpenStreetMap layers. The areas exposed to direct sunlight are shown in yellow.

Trento, direct sunlight, 15 Dec 2013 between 10am and 5pm (See here for creating an animated GIF). Quality reduced for this blog.

Situation at 12pm (noon): predicted that the restaurant is still in shadow – confirmed in the photo: 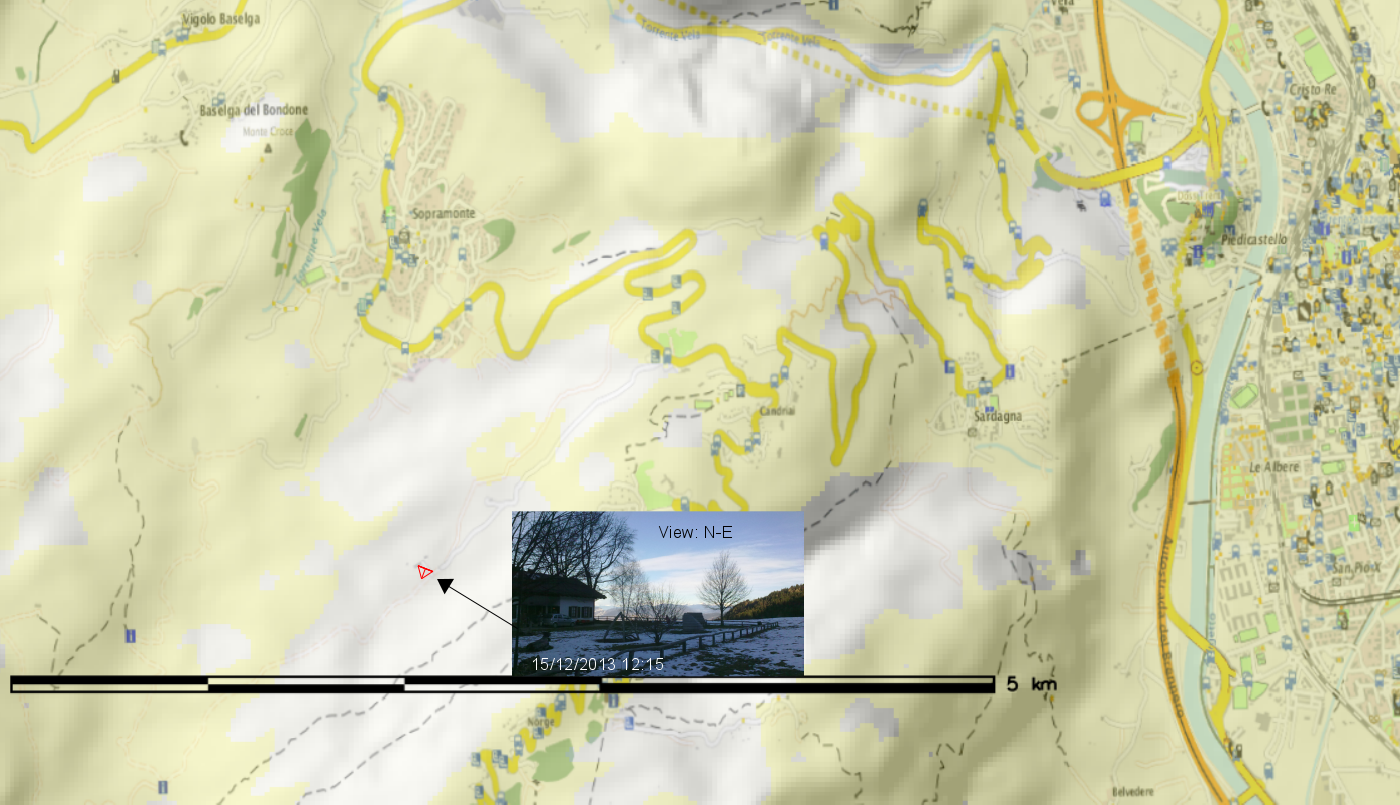 Situation at 1:30/2:00pm: sun is getting closer to the Malga, as confirmed in photo (note that the left photo is 20min ahead of the map). The small street in the right photo is still in the shadow as predicted in the map):

Situation at 3:00pm: sun here and there at Malga Brigolina: 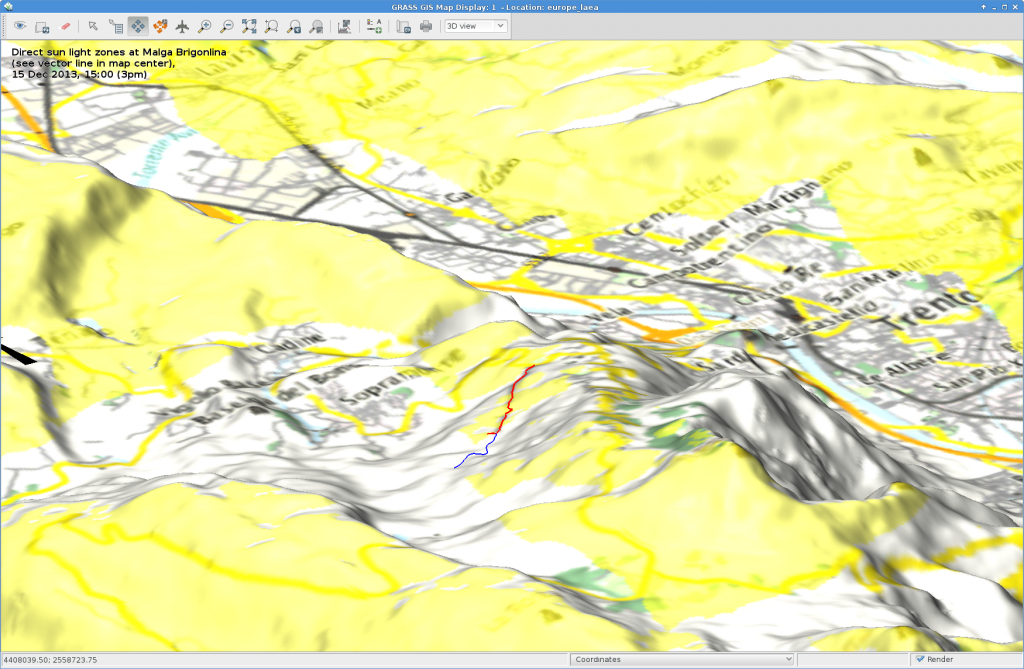 Sunlight map blended with OpenStreetmap layer (r.blend + r.composite) and draped over DEM in wxNVIZ of GRASS GIS 7 (click to enlarge). The sunday walk path around Malga Brigolina is the blue/red vector line shown in the view center.

Situation at 4:00pm: we are close to sunset in Trentino… view towards the Rotaliana (Mezzocorona, S. Michele all’Adige), last sunlit summits also seen in photo: 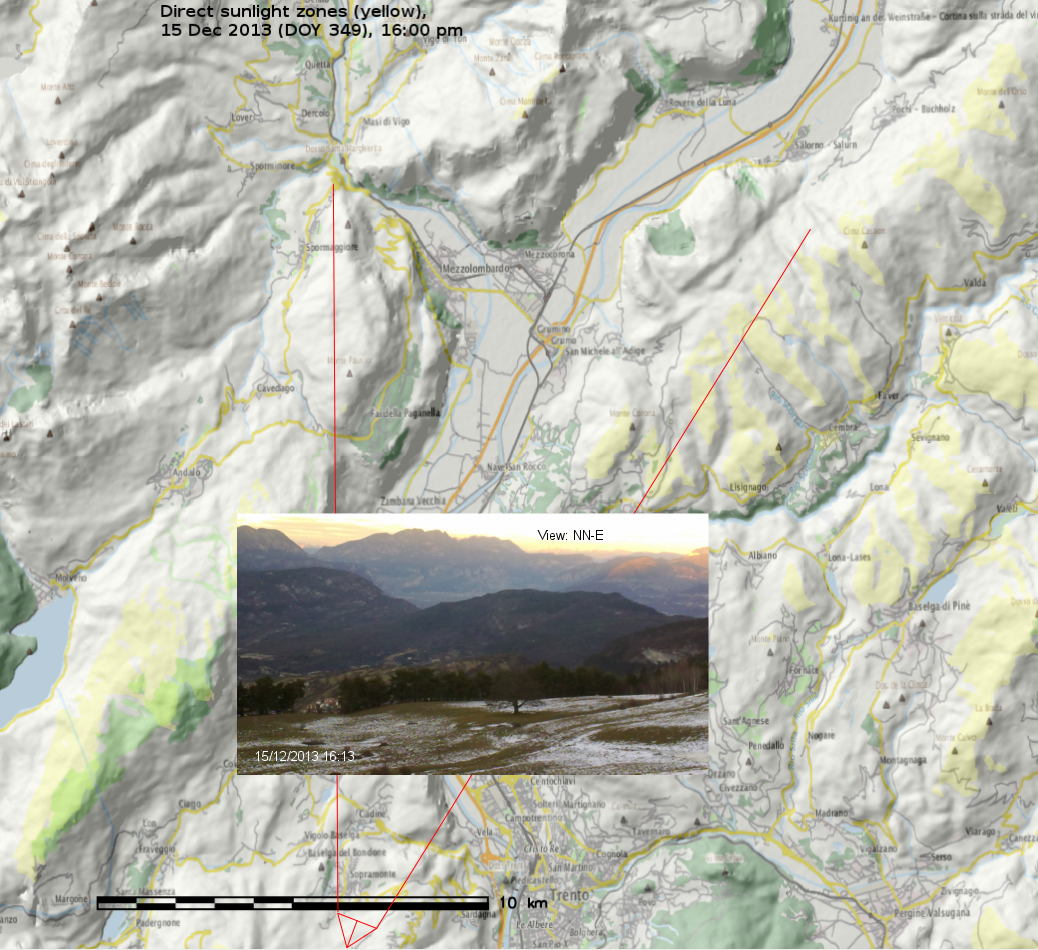 The wxGUI settings were as simple as this (note the transparency values for the various layers): 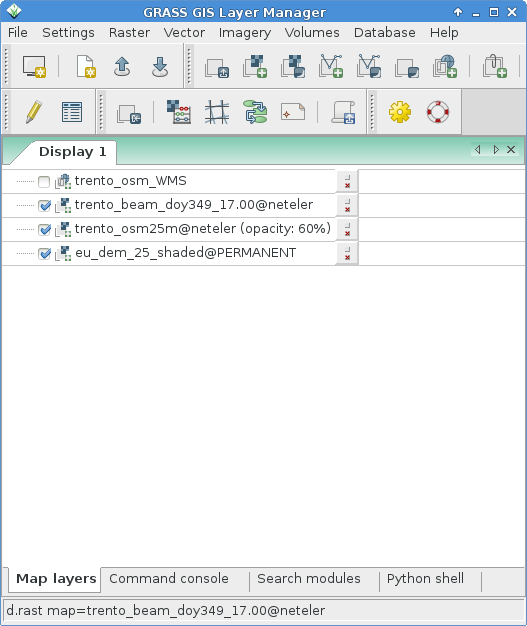 Inspired by Vaclav Petras posting about “Did you know that you can see streets of downtown Raleigh in elevation data from NC sample dataset?” I wanted to try the new GRASS GIS 7 Addon r.shaded.pca which creates shades from various directions and combines then into RGB composites just to see what happens when using the new EU-DEM at 25m.

To warm up, I registered the “normally” shaded DEM (previously generated with gdaldem) with r.external in a GRASS GIS 7 location (EPSG 3035, LAEA) and overlayed the OpenStreetMap layer using WMS with GRASS 7’s r.in.wms. An easy task thanks to University of Heidelberg’s www.osm-wms.de. Indeed, they offer a similar shading via WMS, however, in the screenshot below you see the new EU data being used for controlling the light on our own: Next item: trying r.shaded.pca… It supports multi-core calculation and the possibility to strengthen the effects through z-rescaling. In my example, I used:

The leads to a colorized hillshading map, again with the OSM data on top (50% transparency): The 25m European Digital Elevation Model (EU-DEM, Version 1) is a Digital Surface Model (DSM) representing the first surface as illuminated by the sensors:

Its elevations were captured at 1 arc second postings (2.78E-4 degrees). The tiles are provided at 25m resolution in EU-LAEA (EPSG. 3035) projection, temporal coverage: 2000, published in Oct 2013. It is a realisation of the Copernicus programme, managed by the European Commission, DG Enterprise and Industry. Metadata are provided here. According to their “Methodology” page it is a hybrid product based on SRTM and ASTER GDEM data fused by a weighted averaging approach and it has been generated as a contiguous dataset divided into 1 degree by 1 degree tiles, corresponding to the SRTM naming convention. In addition to the DEM data, a colour shaded relief image over Europe is provided.

From the metadata page: “The EU-DEM data are provided as is, i.e. without a formal validation yet. An independent statistical validation is scheduled as part of the GIO land monitoring service activities, and will be made available in the course of 2014.”

Note that the GeoTIFF files are of major size, up to 5 GB:

The data come as ZIP compressed files, hence unzipping occurs (or simply use the fancy “vsizip” driver in GDAL).

Hint for GRASS GIS users: instead of importing the data, you can use the r.external command to register the GeoTIFF DEM file instead of imorting it within a EU LAEA projected location. 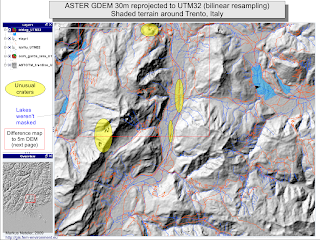 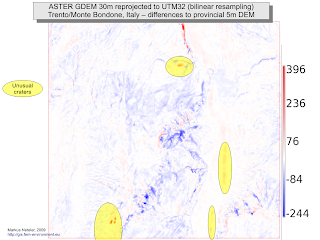 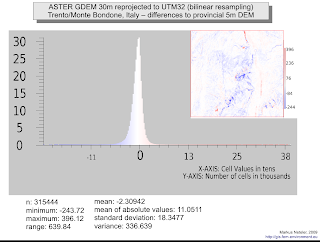